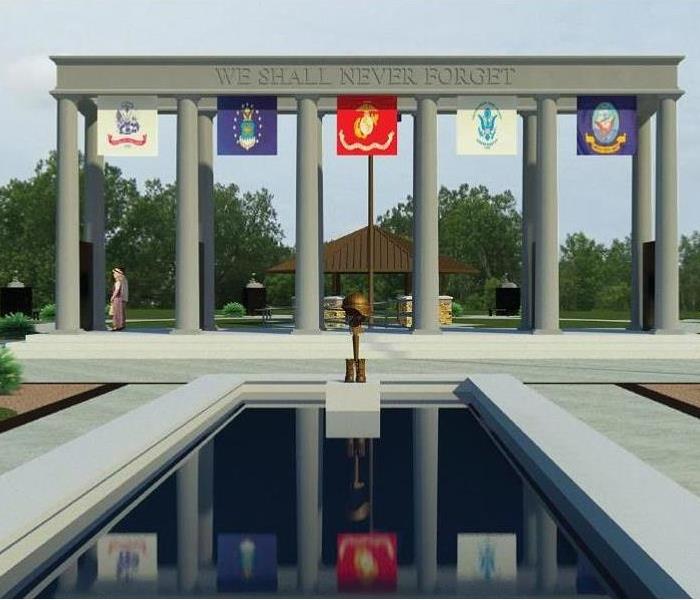 An earlier concept picture showing the reflecting pool and monument.

For several years there have been plans to build a veterans memorial in the Village of Howard.

This is a project that’s close to our hearts at SERVPRO of West Brown County. That’s because, not only, are we located in Howard, but also because our Sales and Marketing Manager Jim Knopf is on the Northeastern Wisconsin Veterans Memorial Board.

The plan is to build a memorial on two acres of land at Howard’s Memorial Park. This specific memorial would honor veterans from 17 different Wisconsin counties.

On Wednesday, Brandon Bauer, an associate professor of art at St. Norbert College, presented a revamped design concept to the Northeastern Wisconsin Veterans Memorial Fundraising Cabinet. (Our Jim Knopf is also a part of this cabinet!)

Bauer’s proposal took the original concept, which was a very linear design, and made it more interactive and educational.

Bauer’s design includes a central monument, a reflecting pool, an education center, an open-air amphitheater, an eternal flame, a nature observation deck, a gazebo and several individual conflict memorial sites interspersed throughout the park. Those individual conflict memorial sites would each be devoted to a specific war, like, say World War II. Each site would have information about that specific war, such as the names of the Wisconsin service members who lost their lives in that conflict.

Of his concept Bauer said, he thought about “really making this a destination,” meaning he wanted to incorporate as many elements as possible to draw in visitors and to give those visitors a good, educational experience.

At this point, the memorial is still in the early planning phase. So, it’s unclear what the ultimate cost could be. However, the Northeastern Wisconsin Veterans Board had previously set a fundraising goal of a little more than one million dollars. To date about $170,000 has been raised. The board is accepting a mix of public money and private donations and sponsorships to bring the memorial to life. Board members say they will also seek out grants to help with funding.

The next steps in the process are for the full board to review Bauer’s concept and for the Village of Howard’s engineering department to come up with a rough estimate of the cost of that concept.

The board is scheduled to meet on Wednesday August 1st at 9:00 in the morning.

For more information and to find out how you can donate, you can visit the memorial’s website here: http://newivetmemorial.org/.